Expansion of infrastructure in Middle East & Africa to translate into an anticipated CAGR of over 7%. - Bonafide Research.

Expansion of infrastructure in Middle East & Africa to translate into an anticipated CAGR of over 7%. - Bonafide Research. 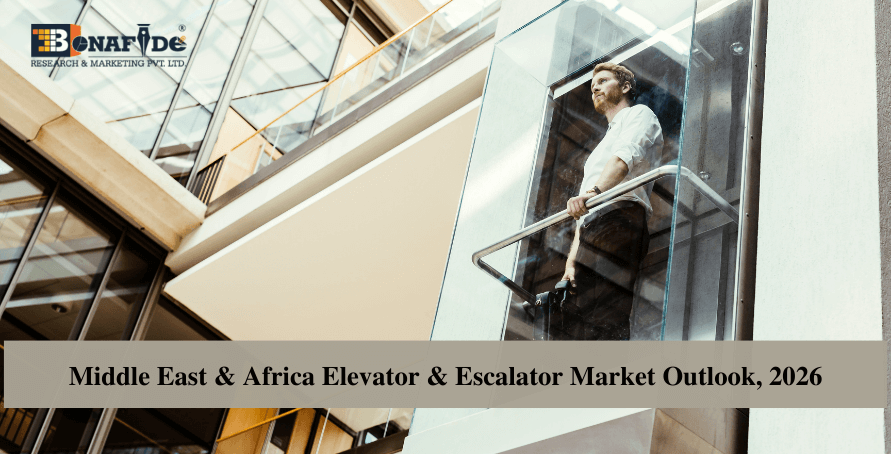 The application of elevators and escalators is gaining traction in the Middle East & African countries, with the increasing number of tourists has been playing a major role in the construction of new infrastructure. According to the recent publication of Bonafide Research titled, - Middle East & Africa Elevator & Escalator Market Outlook, 2026, the elevator market held a high share of over 60% and is to exhibits a decline in the market share, in the market share. The upcoming projects and the ongoing projects of infrastructure construction in the form of commercial centers like malls, hotels, etc., and non-commercial residences is the major driving factor for the market. This had allowed the escalator market to reach a market value of USD 2.28 Billion in the year 2020. However, through the forecasted period, the moving walkway segment is expected to show the highest CAGR of over 8%.

These countries have a high dependency on the imported components to meet the demand. The region which is popular for its oil exports is now actively diversifying its economies by focusing on domains such as tourism and manufacturing. The new installation segment is predicted to undergo significant growth over the coming years as well. Major hotel chains are expanding their presence across the region and large-scale government infrastructure development projects, such as airport expansions, metro expansions, and development of other social infrastructure, are strengthening the maintenance & repair segment to a share of 3.84% in 2020. By the end of the forecasted period, the region is likely to reach a market share of 10.96%. Fuelled by greater investment in commercial, residential, and hotel development, new installations, along with related maintenance, are expected to grow, increasing the region's appetite for imported lift components. Apart from this, the residential end user segment is expected to witness a growth of over 6.28% CAGR in the period 2021-26, reportedly the lowest among the end user segment.

Parachute systems are vital in the high-speed elevator in terms of passenger comfort and safety, but are not appreciated in the region as much as they should be. Finding cheap safety gear on the market is an indicator of this. However, the less-dangerous parts of the elevators are the parts visible to the end-users, while the invisible parts like safety gears are the parts that come with more risks. What is not a surprise to is the elevator & escalator industry of Middle East & Africa is the increase in rider behavior that has become a leading cause of accidents. Indeed, industry efforts to improve safety are constant, but design and maintenance issues are responsible for a scant 5% in the region.

Under its "Vision 2030" program, Saudi Arabia is trying to diversify its economy from oil to non-oil-based and therefore, working on developing tourism & corporate hubs in the country, which in turn is to increase the number of buildings, thereby boosting the demand for elevator and excavator during the forecast period. The region has witnessed a number of promising mergers and acquisitions, one of the prominent being, Hitachi Elevator Saudi Arabia Launched Hitachi Ltd. has launched Hitachi Elevator Saudi Arabia Ltd., a joint venture with Saudi Arabia investment firm Mayar Holding Co. The smaller region put together held to a share of more than half of the market, and is growing at a commendable pace and reached a market of 52.74% by the end of the year 2020.

US demand acceleration to allow the North America Nonwoven market to grow over 6.3%: Bonafide Research

Asia-Pacific to lead the global non-woven market with more than 6% CAGR: Bonafide Research

Marketers bringing in technological investments to allow the MEA nonwoven market to grow at 7%: Bonafide Research