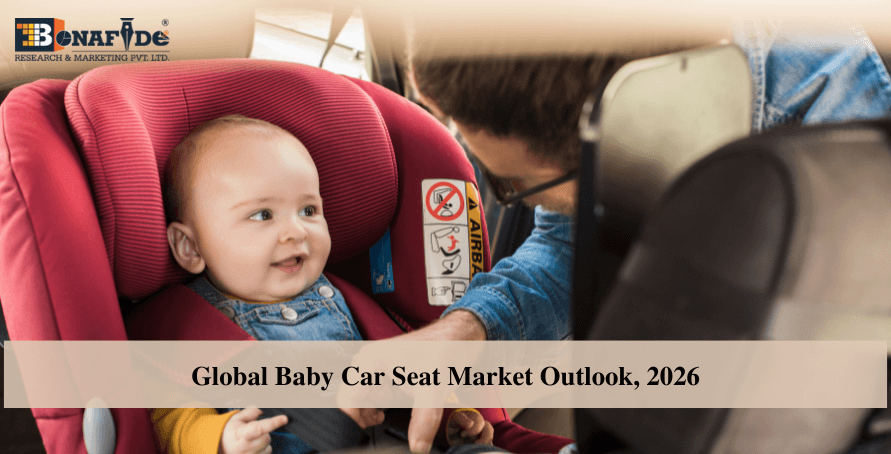 The increasing number of infant deaths in road accidents has been an unfortunate reason for the growth of the baby car market. Globally, most of the crash deaths have been witnessed among the children traveling as passenger vehicle occupants. The proper use of a child restraint system can reduce fatalities to a greater extent. It is proved that restraining children in rear seats instead of front seats reduce fatal injury risk by about three-quarters for children up to age 3, and almost half for children ages 4 to 8. The recent publication by Bonafide Research under the title- Global Baby Car Seat Market Outlook, 2026; studies the market value trend for the period of 2015 to 2026, based on product type, sales channel, region, country & companies.

In the early 1930s, they used solely to increase the height of kids' seats so that parents can keep an eye on them easily. It was almost 3 decades later when a rear-facing baby car seat was invented with intention of child protection by British inventor Jean Ames. Since then, the product had undergone continuous improvements, bringing in safety and comforts both to the kid. The global baby car seat market was at a value of USD 4534.62 Million in the year 2015. The market is confusing as there are only around 96 countries with some sort of legislation governing child restraint systems; and only 85 of these have based their regulations on age, weight, or height. Affordability is the major constrain in the market followed by traditional practices. By the end of the forecasted period, the market is likely to be growing with an anticipated CAGR of over 8%.

A high disposable income and increasing spending on passenger cars are also creating a positive impact on the baby car seat market. In few countries, the new mother-baby duo is not allowed to step out of hospital unless they have a proper child restraint system installed in their car. The infant baby seats accounted for a share of more than 30% since the year 2015. At present, in the foreign developed countries, the baby car seat industry is generally at a more advanced level, and the world's large enterprises are mainly concentrated in the United States. Convertible car seats offer a big advantage when it comes to overall car seat cost and longevity since their usage can grow with the child. Thus, the market for the convertible baby seat segment is expected to show the highest growth rate of 9.09% in the forecasted period.

Broadly classified into three major segments of hypermarket/ supermarket, specialty store & online stores, of which, the former accounts to more than half of the market share. The major reason for this higher preference for the purchase of baby car seats from hypermarkets & supermarkets is the availability of guidance in the local language and installation support. The increasing trust in e-commerce sites coupled with the enhanced digitalization by companies is to be driving the online store's segment in the market. With millennials becoming parents, the online store segment of baby car seats is expected to grow with an anticipated CAGR of 12.13%.

While Europe dominated the global market, the Asia Pacific region is to be a potential market. Increasing safety awareness influenced by the government and media in developing countries including China and India is expected to drive the demand for the product. Deficient legislation, in most cases, is found in poor or developing countries. In fact, of the 10 countries with the highest population, only two have implemented best practices in their laws governing CRSs: Brazil and Russia. This is not the case with China, India, the USA, Indonesia, Pakistan, Nigeria, Bangladesh, or Japan. The global market is led by the US, with more than 20% of the share.