With an existence of fans more than 125 years, Electric fans are one of the few inventions which is to cross INR 15000 Crore by 2025.- Bonafide Research

With an existence of fans more than 125 years, Electric fans are one of the few inventions which is to cross INR 15000 Crore by 2025.- Bonafide Research 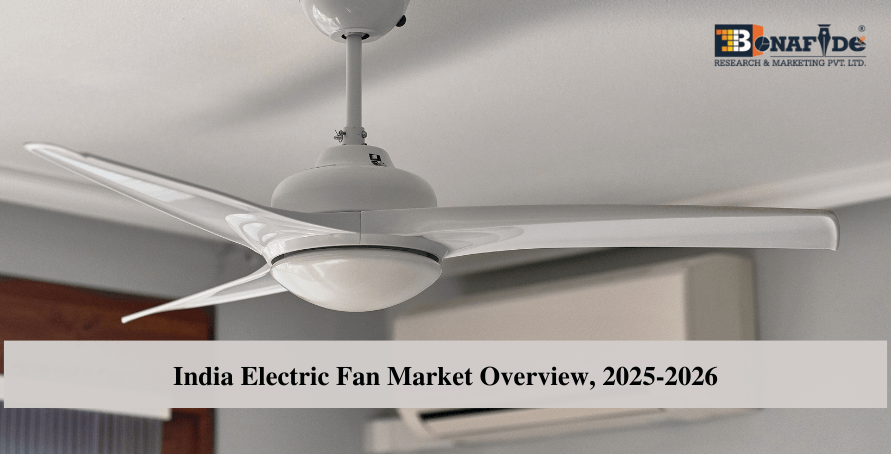 Fans are probably one of the few inventions that have not gone out of fashion even after 125 years of existence. To keep pace with the changing times, manufacturers have focused on improving design, efficiency, and look. Indian Electric fan market is a well-established market because continuous innovations in product aesthetics and energy-saving technology have surged the fan market in India. As per the report titled “India Electric Fan Overview, 2026” the revenue from the India Electric fan Market would cross INR 15000 Crore by 2025-2026”

The electric fan industry is well-established in the country and has grown significantly over the years. A large number of players in both, organized and unorganized markets, has helped the fan industry to come a long way. However, much of the growth has been through organized players now as consumers move towards branded and more technologically efficient fans. A concerted move has been seen towards widening distribution reach and improving rural penetration by the organized players. Also, the threat from Chinese fans has lowered in the past few years due to squeezed competitiveness gap.

Currently, six players from the organized market such as Crompton Greaves, Havells, Usha international, Orient Paper, Bajaj Electricals, and Khaitan Electricals largely dominate the organized sector. These players are witnessing impressive growth in revenues on the back of rising demand for premium and super-premium fans. But on the other side, the rising input prices of copper, aluminum, etc. are causing a drag on their margins. India Electric fan has major four categories viz. Ceiling fan- dominates the industry, Table fans- gives them the flexibility of moving to any part of the house as and when required, Pedestal Fans- highly portable, height adjustable and fitted with castor wheels for easy mobility, Wall Fans- do not occupy any space and can be used in residential, commercial and industrial places.

As consumers realize the longer-term benefits of savings on “higher star” products, they are more willing to pay higher upfront prices to take advantage of the savings over the life of the product. The government’s initiative to drive energy efficiency through increased use of LEDs and five-star-rated Pumps and Fans has led to higher consumer awareness.

The organized electric fan market is further divided into categories such as economy fans, regular fans, and premium fans. Economy fans are below Rs1500, Regular fans range from Rs 1500-2500 and premium fans are above Rs 2500. Among them, premium fans are capturing their space in India based on disposable incomes and lifestyle changes. People are comparing or want their lifestyle like global countries which has accelerated the growth of premium or luxurious items which would give them more satisfaction for their purchase. Due to the penetration of common ceiling fans, premium range fans would lead the market in the coming market.