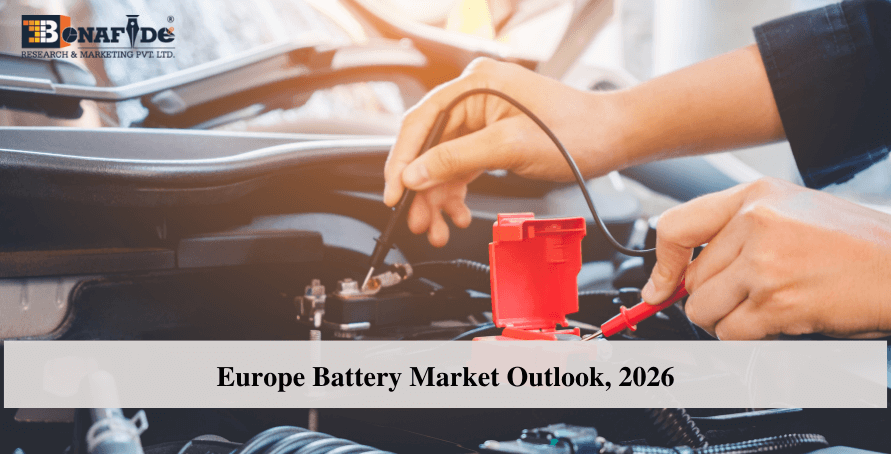 Norway is the largest electric vehicle market in Europe. The other major nations experiencing strong growth of EVs are Germany, the United Kingdom, the Netherlands, Portugal, Sweden, Finland, and France, amongst others. According to the report title 'Europe Battery Market Outlook, 2026' published by Bonafide Research, the region holds 27.68% in 2015, following the Asia Pacific in the total battery market. The EU Battery Directive (2006/66/EC) regulates the manufacturing and disposal of batteries and accumulators in the European Union to protect human health and the environment from hazardous substances such as mercury and cadmium.
The primary battery segment was at a market value of USD 3.34 Billion in the year 2020. The usages of the battery have made their way into smart electronics, robots, electric mobility, and renewable-based energy generation, which was earlier bound to consumer equipment, toys, and starting-lighting-ignition. Owing to the increasing demand from the automotive, telecommunications, and renewable sectors, the battery demand in the region is likely to witness significant growth in the coming years.
According to the European Commission, every year, approximately 800000 tonnes of automotive batteries, 190000 tonnes of industrial batteries, and 160000 tonnes of consumer batteries enter the European Union. The least contributing segment of industrial application valued at USD 5.27 Billion in 2020. The automotive application segment of batteries is expected to continue inclining in market share and is expected to portray a growth rate of 9.77%. The market is led by the lead-acid battery segment, which held a share of over 50% until the year 2020. It is increasing awareness of global warming and rising populations that have driven the development of battery storage/power in Europe to date. The nickel-cadmium and nickel-metal hydride battery segment together is expected to account for USD 0.96 Billion by the end of the forecasted period.
In 2015, the Italy battery market accounted for the lowest of USD 1.35 Billion. Contrarily, Germany became an attraction for foreign investments towards the lithium-ion battery manufacturing facilities. In May 2019, a Chinese battery manufacturer, Farasis Energy, announced to invest USD 674 Million for building a lithium-ion battery manufacturing plant in Germany. Being the market leader, the country is expected to grow with the highest CAGR of 8.27% through the forecasted period.
The region on whole has been attracting major investments currently that have proved to be fruitful for the market. In 2019, the European Raw Materials Alliance announced that investment in the European battery ecosystem reached more than USD 70 Billion, three times more than in China. Companies are required to comply with the European Union’s Battery Directive responsibilities to avoid fines and shipping barriers upon import into any of the 27 EU Member States. The Europe battery market is fragmented with the presence of several players. Some of the major players include BYD Company Limited, Contemporary Amperex Technology Co. Limited, Saft Groupe S.A., Tesla Inc., FIAMM SPA, GS Yuasa Corporation, LG Chem Ltd. The major considerable companies headquartered in the region are Akasol, ARTS Energy, Bosch, BroadBit, Continental AG, E4V, Electrovaya, Johnson Controls, Nexeon, Northvolt, Oxis Energy, Targray, and Varta Storage.