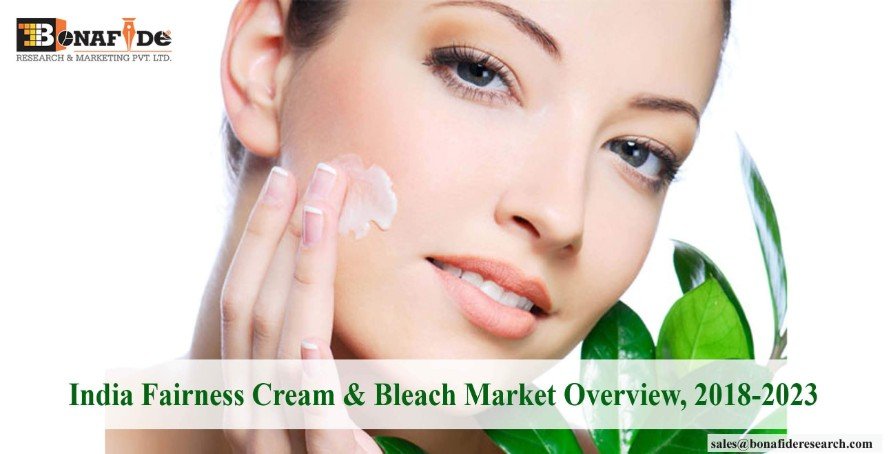 High literacy rate, demand from single working women, beauty pageants at national & international level, pressure of society, marriage issues, desire to look beautiful and fair, etc. are some of the major factors which have pushed the market of women's fairness cream in India.

According to recently published report of Bonafide Research, "India Fairness Cream & Bleach Market Overview, 2018-2023", the women's fairness cream category is anticipated to achieve market revenues of more than Rs. 5,000 crore by year 2023. Rising influence of media and entertainment, pressure of society to look well groomed all the time, inferiority from colleagues at workplace, desire to try new products launched in the country, escalating number of young population, etc are some of the factors which drove the market of women's fairness cream market in last some years and still driving. Additionally, there are many beauty pageants shows organized in India which has aspired women to win the crown for the country, for example Miss World, Miss Universe, Miss India, etc. This has created a hunger in Indian women to look beautiful and fair to compete with other women of different countries.

There's always been a crazy obsession in Indian women for fair-toned skin. Dusky ladies often subject to racial discrimination in their own country. There are many matrimonial sites in India which differentiate the skin colour into fair, dusky and dark. For instance, Shaadi.com, a leading Indian matrimonial website, cites fair skin as the key factor. The desire for whiter skin goes beyond the middle classes, but those who cannot afford branded, expensive products use a host of traditional remedies such as lemon juice, rose water, honey, egg yolk, cream or cumin. During the time of marriage, boy's parents prefer the girl who has white-toned skin; else the girl is rejected most of the time. Rejections sometimes create a lot of stress and depression for the girl's family specially the girl.

Additionally, there are lots of advertisements prevailing in the country since many years, which give preference to the fair skin only. Many Indian film stars have appeared in advertisements for whitening creams including Katrina Kaif, Deepika Padukone, Sonam Kapoor and Preity Zinta, Yami Gautam, etc. For years, skin-lightening creams and other products have shown people mostly women with dark skin as having problems when it comes to finding jobs, getting married and generally being accepted by society. The makers of these ads include behemoths like Hindustan Unilever, Johnson & Johnson and P&G. Though, protests have been done against the fascination for fairer skin, especially over social media. Also, many campaigns were launched against racist advertisements by Fair & lovely, Fair & Handsome, Garnier, Neutrogena, etc. For instance, actress Nandita Das who is often referred to as Dark in magazines and newspapers, is actively involved in the campaign "Dark is Beautiful". Still, Indian women somewhere is attached to the use of fairness cream in their day to day life.

Other than fairness cream, bleaching is also an option for women who want to get instant fairness solution. The number of advertisements for fairness bleach cream is very less in India. However, only one bollywood actress 'Sonakshi Sinha' is associated with the brand 'Fem'. Due to this, the fairness bleach cream is not that popular as compared to fairness creams which are promoted by a large number of actresses. The market of fairness cream is expected to grow on account of growing western culture, awareness regarding fairness products made with natural or herbal ingredients, more focus towards looks & appearance, exposure to international beauty and grooming trends, more international brands making it way into the Indian market, brand endorsements by bollywood beauties, etc.

Experiencing a surge in fitness services, Asia-Pacific’s fitness equipment market have posed a robust growth of over 7% in historical period – Bonafide research

Trend of fitness is striking Middle-East & African countries elevating its fitness equipment industry letting it to grow with robust CAGR of over 6.5% - Bonafide Research