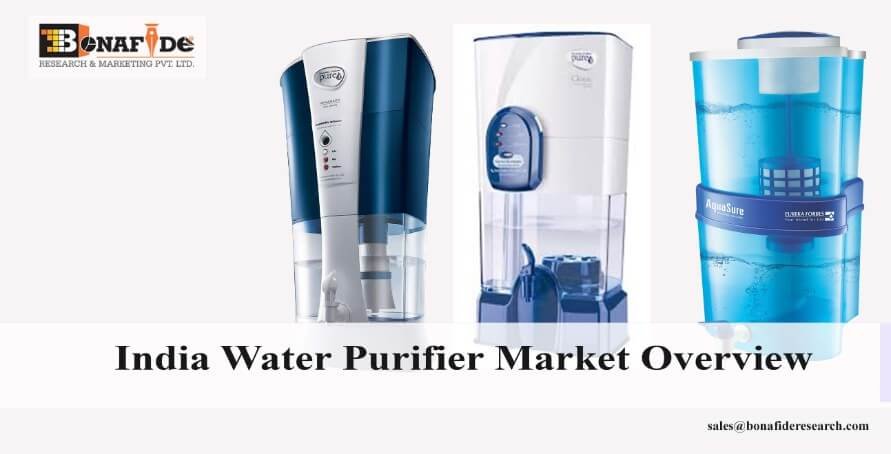 Water purification is the process of removing suspended solids and gases, contaminants, and undesirable chemicals from drinking water. Water purifiers enable the process of water purification. Water purifiers have been used throughout history to improve the aesthetics and safety of drinking water. India holds 17.4% of the world's population yet it only contains 4% of the world's fresh water resources, which are declining in terms of both supply and quality. Although drinking water was once considered safe in India, today providing nearly 1.2 billion inhabitants with access to safe drinking water is an increasingly difficult challenge. Groundwater sources are being rapidly exhausted, surface water sources are largely impure and the infrastructure needed to deliver drinking water both in urban and rural areas is either non-existent or needs considerable upgrades to meet the demand. According to recently published report of Bonafide Research "India Water Purifier Market Overview", sales of water purifier are expected to grow with a CAGR of 33.08% over next six years. The deteriorating quality of ground water across many parts of India, which is also the source of a great number of water borne diseases, is heightening consumer’s urgency to purchase water purifiers. Fortunately, rising disposable income in the country is making water purifiers increasingly affordable and prevalent these days. Based on technology, there are three types of water purifiers viz. RO, UV and offline water purifiers. Demand for the electric as well as the non-electric/gravity based water purifiers are showing strong growth. Non-electric purifiers expanded the category significantly in the last few years due to their low pricing. However, electric purifiers are also expected to show more growth due to increasing awareness of their benefits over non-electric. Eureka Forbes dominates the UV water purifier category whereas Kent dominates RO water purifier category. Offline market is largely captured by Hindustan Unilever with its flagship brand Pureit. In the years to come, it is expected that other players will also enter the battle. Manufacturers are constantly launching new models with advanced features but much of this innovation is done in RO segment. UV technology is fast declining owing to less innovation; rather manufacturers are going for combined systems of purifications like RO+UV or UV+UF or RO+UV+UF. Sales have been increasing every year, with the monsoon season witnessing a rising trend. Companies are also trying out unique initiatives to increase the awareness of using water purifiers. For instance, Eureka Forbes has started "Aquaguard Water Shops" for rural areas, where in a small water purifier plant is set up in a village by NGO's which supplies pure water to villagers at 1520 paise per litre. An average village household can fulfill its daily need of pure water for about Rs 10 a day making it a feasible option for villagers. The initiative has already covered about 140 villages and some villages in UP are also beneficiaries. Similarly, Kent has announced to support about 8,500 rural populations through a project called WASH - Water, Sanitation and Hygiene, covering six states and eight villages.